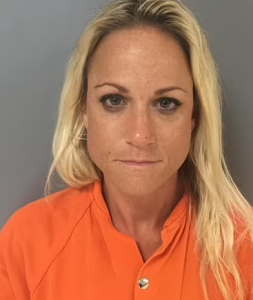 A Louisiana teacher is facing 41 years in prison. Cynthia Perkins pleaded guilty to a slew of sex-crimes charges against children. Police say she gave her students cupcakes laced with her then-husband’s sperm.

Prosecutors offered Perkins a plea deal on Monday as jury selection was slated to begin for her trial. Cynthia Perkins accepted the deal. The plea deal says prosecutors will dismiss 68 charges. I return, Perkins has agreed to testify against her ex-husband. Police say Dennis Perkins is was a sheriff’s lieutenant.

Police arrested Cynthia and Dennis Perkins in 2019 on more than 150 sex-crimes charges. Prosecutors also charge the pair with sexually abusing a child together.

Authorities arrested the Perkinses in October 2019. They found a photo of the pair naked with a minor. Police found the video after receiving a tip from the National Center for Missing and Exploited Children.

The Livingston Parish Sheriff’s Office fired Dennis Perkins following his arrest. Prosecutors indicted him on 78 felony counts. Dennis had worked with the sheriff’s office since 2002. He was the head of the SWAT team at the time of his arrest.

Prosecutors indicted Cynthia Perkins with 72 felony counts in the indictment.

She had taught English language arts at Westside Junior High School since 2016. Prior to that, she worked at North Live Oak Elementary and Live Oak Middle School for four years.

Cynthia filed for divorce shortly after her arrest. She alleges that Dennis had manipulated her into committing the crimes.

Mrs. Perkins waived any right to an appeal and an attempt to avoid conviction with the plea deal.

Louisiana Attorney General Jeff Landry also said she ‘spared the victims from reliving her horrific crimes during this particular trial.’

We weighed all the options and available information, and considering the circumstances… We really feel as though this was the best decision,’ Spokes said. Cynthia decided this was in her best interest.

The former teacher will also testify against Dennis Perkins in his upcoming trial in May. The prosecution argued that her testimony would extremely helpful to their case.

Four different people have filed lawsuits against the former couple. The lawsuits accuse them of feeding baked goods containing Dennis’ semen to Cynthia’s middle school class in 2018 and 2019.

One complaint alleges that the father of a student who ate the contaminated cupcakes has fallen into a debilitating depression. As a result, he has not been able to find gainful employment.

In a suit filed last May, a student’s parents alleged that Cynthia showed the girl inappropriate images. The suit also alleges that she photographed and videotaped the minor.

All four lawsuits also accused the Livingston Parish School Board of negligence.