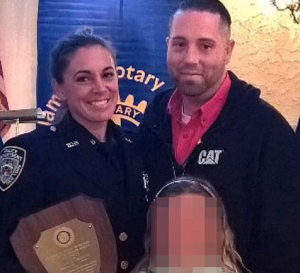 Valarie Cincinelli with her ex-husband, Isaiah Carvalho and her daughter from a previous relationship.

A former NYPD cop is going to prison for four years. Valerie Cincinelli hired a hit man to murder her ex-husband and her new boyfriend’s 13-year-old daughter.

Former NYPD cop Valerie Cincinelli pleaded guilty in April to a single count of obstruction of justice. This was part of an agreement with federal prosecutors.

The court sentenced Cincinelli to four years in prison in connection with the botched plot.

As a result, DiRubba cut a deal and began cooperating.

He also told the intended target Isaiah Carvalho of the plot. The two of them and worked together to stage the photos to show Cincinelli.

The Former NYPD Cop Busted Talking About The Hit On Video

Prosecutors also played the video clips to the court. In the video, DiRubba and Cincinelli are inside a house. DiRubba tells her the hit man sent him a text message confirming that the hit on Carvalho had been taken out.

A 12-year veteran of the NYPD in Queens, Cincinelli tells DiRubba that the hit man was ‘a f****** retard’ for sending the text. 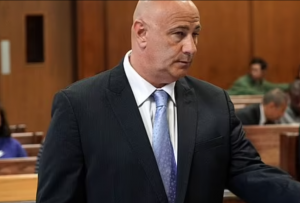 DiRubba tells Cincinelli that the hit man just texted him.

Are you kidding me?’ says Cincinelli,

She then leaps up from the sofa to come closer to DiRubba and see the message.

The text is also accompanied by the photo that DiRubba arranged for the ex-husband to stage.

Cincinelli doesn’t appear to be interested in the photo of her ‘dead’ ex-husband. She appears to be more afraid of being caught.

DiRubba says he is going to ‘erase it quick’. However, Cincinelli says it is not enough.

She explains that their phones will automatically be subpoenaed.

She continues: ‘They are going to get these f****** texts, you dumbass. They can subpoena these photos.’

He says he will throw the phone away, but Cincinelli, incredulously, says that they will still be traceable.

Prosecutos played audio of Cincinelli and DiRubba coldly discussing the plans for the double murder.

‘It’s going to happen this weekend,’ DiRubba can be heard telling Cincinelli.

‘I hope so,’ Cincinelli replies.

DiRubba then says that he is concerned about the planned double murder. Consequently, he tells Cincinelli that having her ex-husband and his daughter die on the same weekend might look suspicious.

‘Why are you stressed out about it?’ Cincinelli asks.

DiRubba replies: ‘I think Isaiah and Tori, it’s very suspicious on one f****** weekend they are both dead.’

Cincinelli calmly replies: ‘OK, so take care of yours, and then wait a month.’

DiRubba continues to express concern. Cincinelli becomes exasperated and says: ‘You say that every weekend for the past month.’

Last week, a judge sentenced Cincinelli to 48 months in federal prison. She did receive credit for time served and good behavior.

Cincinelli’s ex-husband and the target of the thwarted plot, Isaiah Carvalho, was present during sentencing.

It is unclear at this time whether he spoke in court.

As part of the plea deal, prosecutors agreed to drop two murder-for-hire charges against Cincinelli.

Had the case gone to trial and resulted in a conviction, the ex-cop could have faced up to 40 years in prison.

Prosecutors said they had video and audio recordings of Cincinelli discussing the murderous plot with her then-boyfriend, John DiRubba. The prosecutors instead released the audio and video after the sentencing.

The US Justice Department released a sentencing memo prior to the sentencing hearing. The memo called for 60 months in prison for Cincinelli.

Cincinelli and Carvalho were in the middle of a bitter divorce and custody battle in 2019. As a result, The former NYPD cop asked her “sugar daddy” DiRubba to hire a hitman to kill the husband.

She also wanted DiRubba’s 13-year-old daughter dead. Cincinelli was growing tired of the teenager complaining she was spending too much of her father’s money.

Police arrested DiRubba for an unrelated crime and told police about the murder-for-hire plot. Consequently, he then cooperated with them to snare Cincinelli.

Prosecutor initially charged Cincinelli with murder-for-hire and obstruction. However, prosecutors and her attorneys agreed to a plea deal.

During her plea hearing, Cincinelli also admitted deleting images of her iPhone to obstruct a grand jury investigation.