California Mom Accused Of Having Teenage Sex Parties For Son

California Mom Accused Of Having Teenage Sex Parties For Son 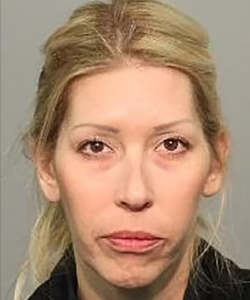 A California mom has been accused of hosting teenage sex parties for her 15-year-old son and his friends. She would allegedly hand out condoms and alcohol until the guests vomited and fell unconscious.

Shannon O’Connor is accused of holding several parties for her son and friends during an eight-month period from 2020 to March this year. In addition, she pressuring those in attendance to keep quiet about the debauchery.

Prosecutors allege 47-year-old Shannon O’Connor would buy vodka and fireball whiskey for the parties. She would also even watch and laugh while the 14 and 15 year-old teenagers engaged in sex acts.

The mother is said to have kept the parties secret from her husband and other parents.

It took a lot of brave children to come forward and to untangle this deeply disturbing case. As a parent, I’m shocked. As the DA, I’m determined to hold those adults who endanger children fully accountable to the law.

O’Connor aka Shannon Bruga was arrested in Ada County, Idaho. She was booked into an Idaho jail with prosecutors planning to extradite her to California.

Attendees stated they were warned if anyone talked O’connor could go to jail.

In one case, she went to a bedroom and watched a drunk teenage boy get on top of and grope a girl who was a friend of O’Connor’s then-15-year-old son, according to court documents.

A 14-year-old also alleged that she was threatened with retaliation if she told anyone. The girl was told if she spoke up, she would suffer rumors being spread about her.

At one party, O’Connor handed a boy a condom and pushed him into a room where a drunk 14-year-old girl was lying on the bed. Frightened, the girl ran and locked herself in the bathroom.

O’Connor also took a boy to a room at another party and left him with a girl who also was drunk. Prosecutors say the girl was allegedly assaulted. The girl alleges she later confronted O’Connor about leaving her while she was extremely drunk.

In another incident, the mother is accused of seeing a boy punching and kicking an intoxicated girl. However, she did nothing to intervene.

In October 2020, there was $9,000 worth of damages at a house she rented in Santa Clara. Surveillance footage showed teens throwing up and stumbling around the property.

One mother suspected something and raised her concerns with coaches and school officials in early 2021. However, she was told there was nothing they could do about it.

Los Gatos-Saratoga Union High School District said in a statement it investigates ‘any issues that arise on our campuses and work closely with law enforcement to support their investigation into matters that take place outside of school.’

The DA also said O’Conner is facing felony charges including child abuse and sexual assault. She also faces fraud charges of more than $120,000 in unauthorized charges on a company credit. She was an administrative assistant at Aruba Networks.

She was grooming these kids. She was setting them up for sexual acts and she’s a mother and doing this to her own child. I’ve been racking my brain trying to think what was in it for her.

You can also read more great stories by clicking here.